A few weeks ago, I wrote this post about the storyboard’s features introduced in iOS 9. In that post, I mentioned that you can now trigger a custom view controller transition through storyboard segues. Starting from iOS 9, you can perform view controller transitions using the new APIs introduced by Apple first in iOS 7 and, then slightly modified in iOS 8. These APIs use dedicated objects to control the transition animations. In this post, I am going to show you how to use these APIs and trigger these animations from the storyboard.

Besides this classification, I personally use a different one based on the classes involved in the implementation of the transition. I divide view controller transitions in two main groups:

Each of these groups can be interactive or non-interactive. Let’s analyze each of them separately.

Let’s build an example with a navigation controller. Create a new app and choose a Single-View Application. Choose Swift as language. Name the project Custom Navigation. Open the Storyboard and select the View Controller.

Then go to the Xcode menu Editor > Embed In > Navigation Controller.

In the navigation bar of the original view controller, let’s add on the right side a bar button item and change its title to be Next. This button will trigger the transition.

Now, let’s add some source code. First of all, we need to create the animation controller. This object is an instance of class that conforms to the UIViewControllerAnimatedTransitioning. So, let’s add a subclass NSObject to our project and let’s name it Animator. Make this class conforms to the transitioning protocol.

The transitionDuration(_:) method returns the duration of the animation. Let’s add the following implementation to our Animator class:

With this method, we are telling the animation controller that the transition will last 1 second.

Before we implement this method, we need to write some code that instantiates the animation controller. We can use the navigation controller delegate. We could make the AppDelegate the delegate object of the navigation controller. Instead, let’s use the segue we already added in the storyboard. Add a new subclass of UIStoryboardSegue to the project. Let’s name it CustomSegue. Now, select the storyboard between the 2 view controller and change the class of the segue to CustomSegue in the Attribute Inspector. Let’s modify the class in this way:

In line 1, I make the CustomSegue class conform to the UINavigationControllerDelegate protocol. Then, I override the perform() method and before call it on super (that will actually trigger the segue), I set the custom segue as the delegate of the navigation controller. This allows me to use the method:

In the Animator class, I add a new property that will hold the type of navigation operation and a designated initializer:

I also add two constant properties that I will use later in the animation:

Now, I can go back to the animateTransition(_:) method.

Additionally, I get a reference to the containerView. This view is created by the transitioning context to contain the animation. I will use it as the superview of the views of each view controller.

Then, I switch on the operation property:

The following code goes inside the push animation:

In line 1, I move the toView to the right side of the screen and prepare it for the second part of the animation. In line 2, I add it to the containerView. In line 3, I start the view animation using the spring damping and spring velocity defined in the properties. In line 4, I apply a scale transform to the fromView (notice that I did not need to add the fromView to the containerView since it is already there when the transition starts). In the completion block of the animation (line 5), I start the second part of the transition. Using the same spring damping and velocity (lines 6 and 7), I move the toView from the right side of the screen to the left (line 8) to cover completely the screen. In the completion block of this second animation (line 9), I finally tell the animation controller that the transition has completed (line 10).

This animation is very similar to the previous one, so I don’t any additional comment. If you implemented everything correctly you should see the following transition:

I leave you as exercise the implementation of the same transition with a tab bar controller. In this case, you need to make the CustomSegue conform to the UITabBarControllerDelegate protocol and implement the method:

Instead, let’s see what happens when you present a view controller on the screen from a parent view controller. In this case, you use what I call custom presentation transition.

Let’s add a new UIViewController subclass to our project. Name it SecondViewController and associate it to the newly added view controller in the storyboard.

Now, let’s add a subclass of UIStoryboardSegue to the project. Name it CustomSegue. This time, I make the custom segue conform to the UIViewControllerTransitioningDelegate:

The UIViewControllerTransitionDelegate provides these methods:

In this example, I am going to use the same animations I implemented in the navigation controller example. I add to the project 2 new classes: PresentationAnimator and DismissalAnimator. You could make the custom segue conform to the UIViewControllerAnimatedTransitioning protocol and add the following source here. For didactic reasons, I am going to create two distinct classes, instead.
Both classes need to conform to the UIViewControllerAnimatedTransitioning protocol. And both of them must implement the transitionDuration(_:) and the animateTransition(_:) methods. Here the implementation of the PresentationAnimator class:

As you can see, this is similar source code I used for the custom transition with the navigation controller. The following is instead the implementation of the DismissalAnimator class:

To make the DismissalAnimator work, we need to unwind the segue. So, go to the ViewController.swift file and add the following action to it:

You can leave this action empty. Then, go to the storyboard and right-click the Exit object in the SecondViewController and connect it to the Dismiss button as shown here: 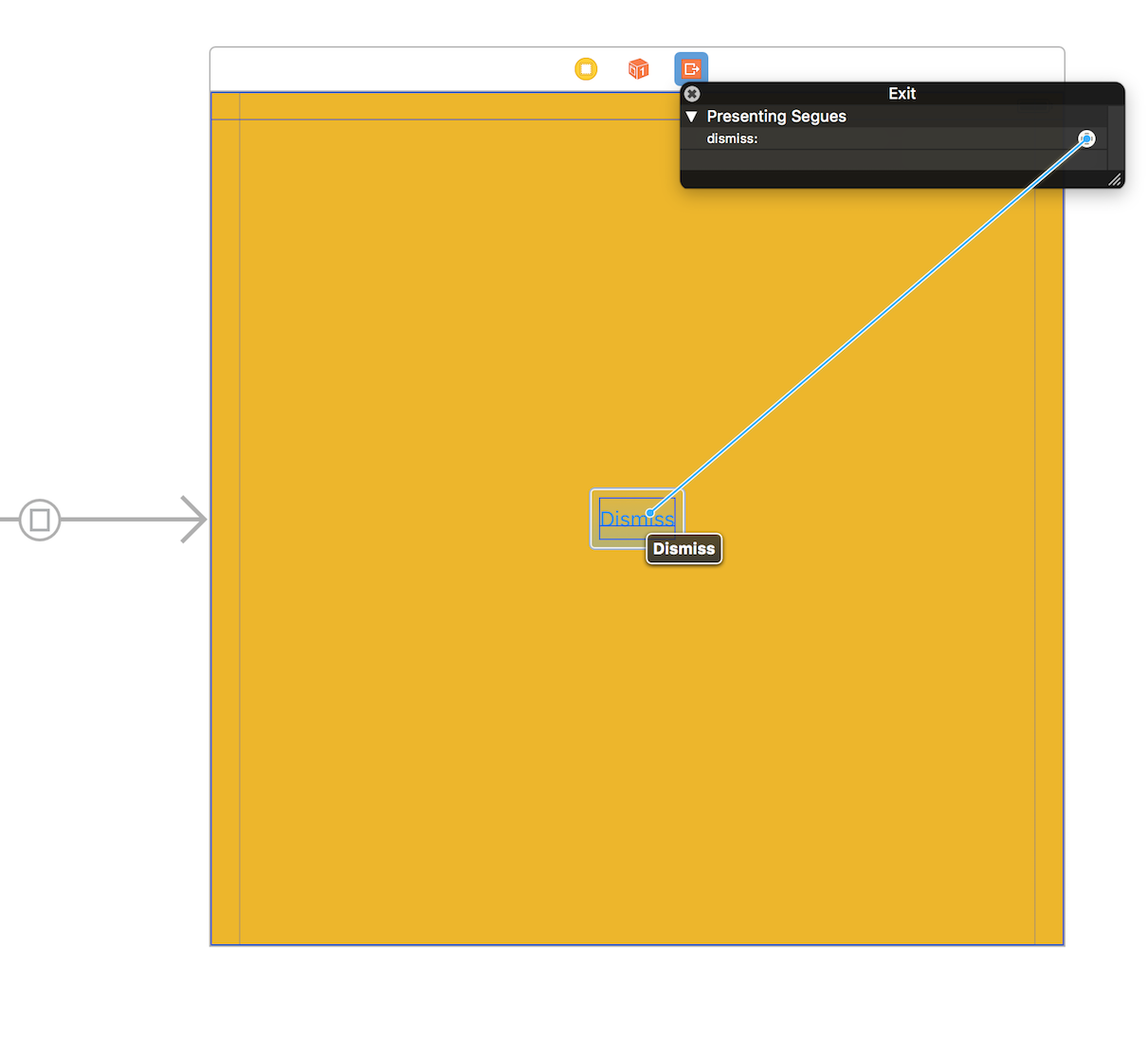 I demonstrated how to combine the view controller custom transition APIs and the storyboard segues. This is a new feature introduced by Apple in iOS 9. Next time, I will show you how to create interactive transitions.