In this post, I am going to show you how to use Metal to perform parallel processing directly on the GPU. As an example I am going to process an image using a custom filter. This is something you can also do with Core Image. Actually, I recommend you to use Core Image instead of Metal for different reasons. First, Core Image is simpler to setup. Additionally, Core Image offers the possibility to build your custom filters. Starting from iOS 9, Core Image was fully rewritten to take advantage of Metal. However, since you can use Metal to perform any kind of processing (for example, audio processing), I want to show you how to setup and create Metal-based projects.

Metal is only available on the device. So, the following examples and source code cannot be compiled for the iOS simulator.

Before we start, I am adding here a small schema showing the components we are going to put together and how they are organized.

While using Metal you perform the processing and rendering operations directly on the GPU. In Metal, the GPU is represented by an object that conforms to the MTLDevice protocol. As you will see in the rest of this post, almost every Metal functionality is offered by the framework through protocols rather than concrete classes.

In iOS and OS X, you create a metal object using the MTLCreateSystemDefaultDevice() function. In OS X, you can also select the metal device from a list of devices returned by the MTLCopyAllDevices() function.

If you are using Swift, MTLCreateSystemDefaultDevice() returns an optional. So, please, handle it correctly.

Once you have the Metal device, you can use it to create different kinds of non-transient objects: command queues, textures and data buffers, sampler states, compute states, function libraries, and pipeline states. I am going to describe in this post many of these objects.

Since it can be expensive to create these non-transient objects, you should create them as soon as possible and reuse them throughout the lifetime of your app. You must avoid to create these objects in performance sensitive code.

Other types of Metal objects (command buffers and command encoders) are instead lightweight objects and must be created and consumed immediately.

To create a command queue, call one of the following methods on a MTLDevice object:

These methods create an object that conforms to the MTLCommandQueue protocol. In general, command queues are thread-safe and allow multiple outstanding command buffers to be encoded simultaneously.

In a multithreaded app, it’s advisable to break your overall task into subtasks that can be encoded separately. You create a command buffer for each chunk of work, then you call the enqueue() method on these command buffer objects to establish the order of execution.

You use the command buffer to create a command encoder object and fill the buffer with commands. The MTLCommandEncoder protocol defines the common interface for objects that can write commands into a command buffer.

In Metal, there are many different kinds of command encoders, each providing a different set of commands that can be encoded into the buffer:

Once you have the command encoder, you can use it to encode the following data-parallel compute processing commands:

The following source code shows an example of how to use a compute command encoder:

To fully understand this chunk of code we need to introduce additional concepts:

Let’s give a look at each of them. I know, there are too many objects. However, you write all this boilerplate code only once. Instead, you will spend most of your time in writing Metal functions (or shaders).

A MTLComputePipelineState object is fully thread-safe and can be used by many MTLComputeCommandEncoder objects, even if they are associated with different command buffers.

In the MTLDevice protocol you find these methods supporting all these options:

The name of the function is the name of the kernel or shader that we are going to write to process the image. A MTLLibrary object can contain Metal shading language code that is compiled during the app build process or compiled at runtime from a text string containing Metal shading language source code.
The best option is to compile the library at compile time (when we build our application). This reduces the overhead of compiling the library at runtime, something very common in OpenGL.

To create a MTLLibrary object by compiling source code, call one of these MTLDevice methods:

The makeFunction(name:) method is used to fetch functions from the library, which makes that code available as a shader for either a MTLRenderPipelineState object for a render command encoder or for a MTLComputePipelineState for a compute command encoder.

If you want to process data on the GPU, you need to convert the data in Metal resources. The MTLResource protocol defines the interface for any resource object that represents an allocation of GPU memory. In Metal, there are two types of MTLResource objects:

To create a MTLBuffer object, you use the following MTLDevice methods:

The following methods create and return a MTLTexture object:

It is good practice to ask the Compute Pipeline State about the maximum number of threads per thread group. You can use the maxTotalThreadsPerThreadgroup property to obtain this information. This number is a multiple of a thread execution width. For best performance, the total number of threads in the thread group should be a multiple of the thread_execution_width and must be lower than the maximum total threads per thread group.

The last line of the previous chunk of code encodes the command to dispatch the thread groups.

Let’s start an example here showing how to process an image using Metal. Create a new Xcode project and call it MetalImage. Use Swift as main language. Open the ViewController.swift and let’s add 2 outlets: 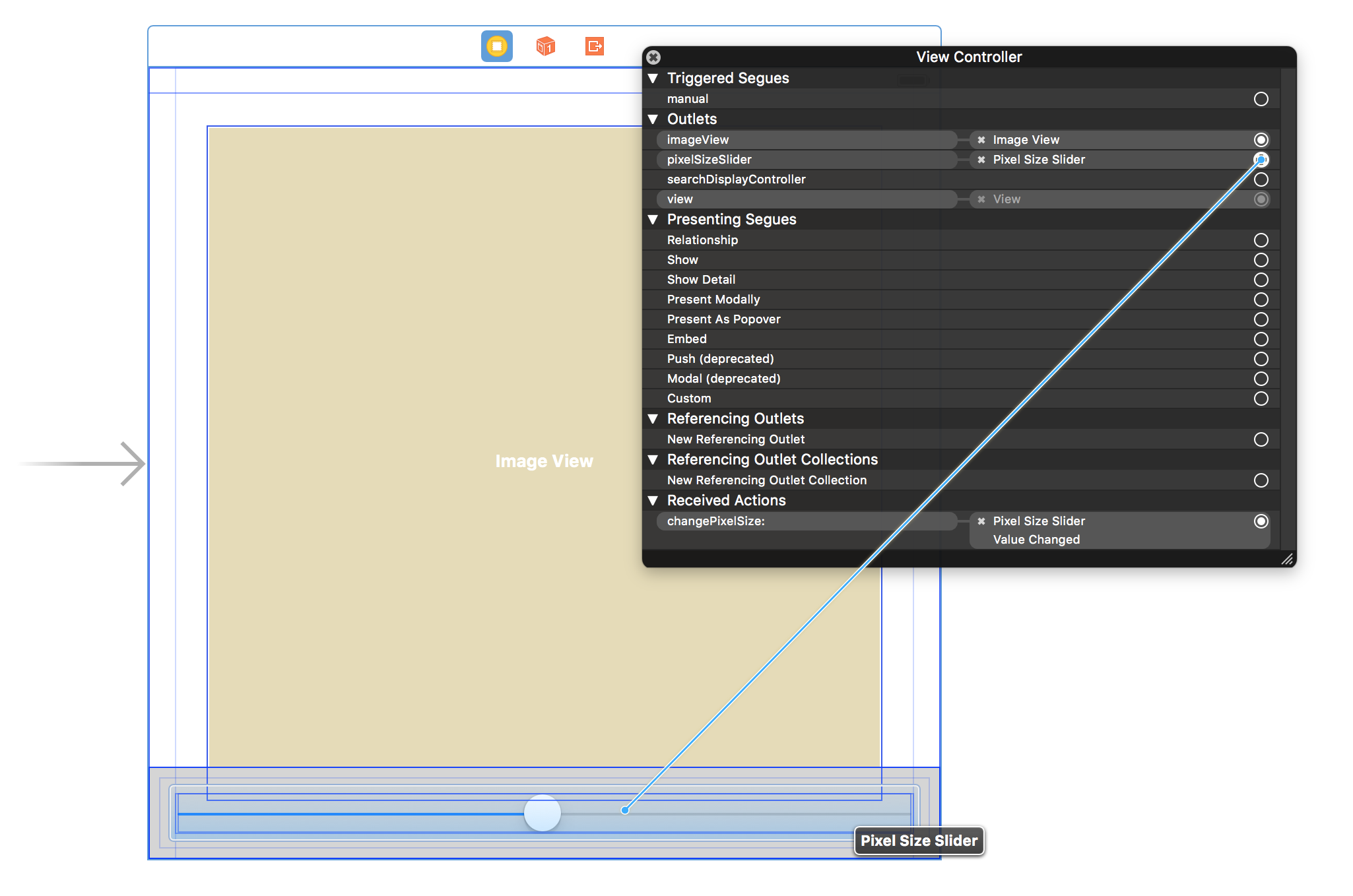 I am going to use the slider to control an input parameter of the kernel function.
Go back to the ViewController.swift and add import Metal to the view controller. Also import MetalKit (we will see discuss MetalKit in a future post). Let’s add some properties to our view controller:

Then, in the viewDidLoad() method, let’s add the following:

In the viewDidAppear(_:), we can call the remaining methods:

Here, I dispatch the methods importTexture(), applyFilter() and image(from:) on a secondary queue. Finally, I dispatch the rendering of the final image on the main queue.

The first method (importTexture()) is used to convert a UIImage in a Metal texture. I could create a MTLTextureDescriptor object containing the specifications of the image and use it to create the texture. However, in iOS 9 Apple introduced MetalKit. This new framework offers an API to import images using a MTKTextureLoader object. So, I initialize a texture loader passing the Metal device.

Once I create a texture from the input image, I get its texture descriptor and use it to create the output texture.

The next method I need to build is applyFilter(). This is the central part of the chain. This is were I encode commands and send them to the command buffer.

The last method to implement in the viewDidAppear(_:) is just boilerplate code to convert the output texture to a UIImage object so that you can display it on the screen.

Now, we need define the kernel function or compute shader. This is a C++ function that is executed on the GPU. Here, Apple chose C++11 as main programming language. I would have preferred to use Swift also for this piece of the chain, but this is what we get now. I will talk more about kernels or compute shaders in future posts. For the moment, add a Metal file in your project and add the following code:

Now, add a Metal file to your Xcode project.

In this post, I showed you how to setup a Metal project for parallel computing using the GPU. Next time, we will see how to use it to perform real-time image processing using the iPhone video camera. Check also this post that I wrote in 2012 to demonstrate how to build a custom video camera. So, you will be able to compare Metal to the Accelerate framework and appreciate its computing speed.