In a previous post, I already provided you with an introduction on Machine Learning (ML) and Artificial Neural Networks (ANN) for iOS. If you are not familiar with this topics, I suggest to read that post, first.

I started to work on Convolutional Neural Networks (CNNs) five years ago while I was at Apple. At that time, the available literature and tools were extremely limited compared with what you can find around today. I used CNNs to build an Optical Character Recognition (OCR) running on iOS and OS X. I am talking of an implementation done in iOS 5. The accuracy of the OCR was amazing, even if its implementation on the device was done at that time using the CPU.

After that work, I continued to use CNNs for other kind of applications. Recently, I am using CNNs for face recognition and facial expression. The results we are getting are amazing.

A CNN makes a large use of a very common signal processing operation called convolution. The convolution performs a weighted sum of a collection of neighboring elements of an array (or matrix). The weights used in the weighted sum calculation are defined by an input array, commonly referred to as the kernel, filter or mask of the convolution.

Convolutions are very important in digital signal (audio, video, image) processing and Graphics Processing Units (GPUs) are optimized to executes convolutions in a very efficient way. GPUs become the most important implementation tool when you want to work with CNNs.

As humans, we also use convolutions in our daily activities, specially in those activities where our 5 senses are involved. For example, while listening to music or looking at something, our brain performs millions of convolutions per second on the sound and the light we receive from the external world.

Let's build an example to understand better how convolution works. The following figure shows a convolution between an input array or 1D signal x[n] and a 1D kernel array w[n]. 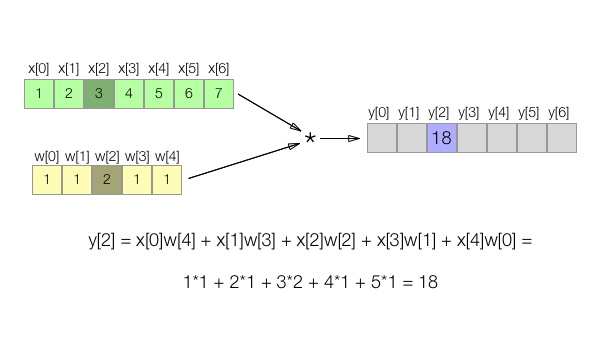 To generalize the previous example, if x[n] is an input sequence and w[m] is a kernel sequence, the result y[n] of the convolution operation can be expressed by the following mathematical expression:

Notice that the sequence w[m] is first reversed and then, translated during the operation.

If we use the previous mathematical formula to compute each element of y[n] of the previous example, then we obtain the following results:

Since a convolution is defined in terms of neighboring elements, boundary conditions naturally exist for output elements that are close to the ends of an array. To avoid this issue, it is very common to add enough elements (called ghost elements) to the ends of the input sequence x[n]. If you add zeros, the operation is called zero-padding. Other approaches are also available. When implementing a convolution, you need to handle the padding.

Let's see how to implement a convolution in Swift. Suppose we have the following input array x and kernel array w:

So, the new padded sequences are:

Now, we can build a convolution between paddedX and paddedK:

Finally, the result of the convolution is:

If you want to speedup the processing of the convolution, you can use the vDSP_conv function provided by the Accelerate framework. Also in this case, I need to handle the boundary conditions and the kernel reversing. This time, I zero-pad the input and the kernel in a different way. Additionally, I need to reverse the kernel (as explained in the documentation), otherwise I obtain the correlation of the two sequences.

Here the implementation using the Accelerate:

For this very short input sequence, you will not appreciate the speedup provided by the Accelerate framework. Instead, I created an input array with 100,000 elements and convolved it with the same w kernel of the previous example. My Swift implementation required 318 ms, while the Accelerate vDSP_conv method required just 159 ns on my MacBook Pro.

Let's see how to implement the same example in Metal. Check this post to learn how to setup a Metal project for computations on the GPU.

Here the source code to create these texture:

In the previous source code, the metalContext is an instance of the following class:

This is just a helper class I usually use to setup the main objects of a Metal stack.

Last method executeConvolution() is instead used to encode the commands for the GPU:

Finally, we need to the Metal kernel. This is where we perform the convolution. A very simple implementation can be the following:

When processing images, convolutions are performed on to 2D data. In this case, an image is represented by a matrix X[n,m] instead of a single dimensional array. 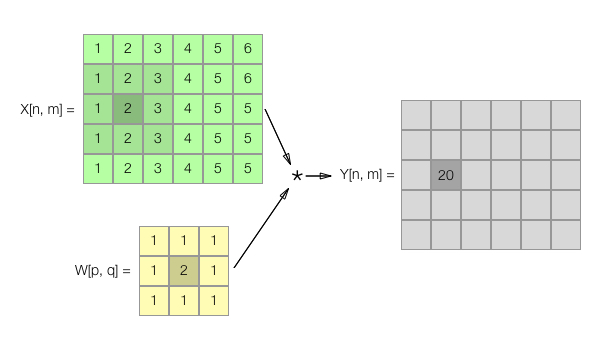 As for the 1D convolution case, I can build here the example for the 2D case in Swift, using the Accelerate framework and also Metal. I leave this to you as exercise. Remember to flip the W along rows and along columns. Additionally, rember to pad X with P-1 and Q-1 zeros on both ends of the matrix. 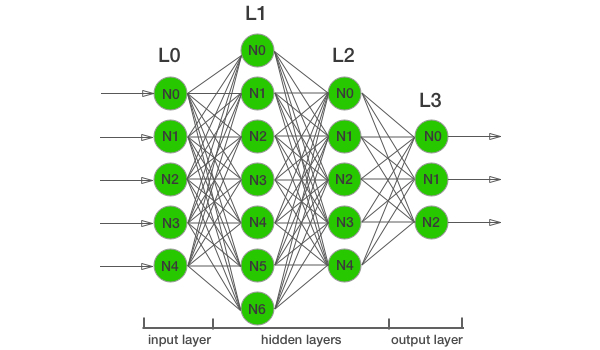 As discussed in a previous post, this network is composed by layers and each layer is composed by neurons. Let's consider the neuron N0 in the hidden layer L1. Its input is the weighted sum of the outputs of each neuron of the previous layer L0:

is the input of neuron N0 in layer L1,

is the output of neuron Ni in layer L0, and

is the weight between neuron Ni in layer L0 and neuron N0 in layer L1.

In the same way, the following equation represents the input of the neuron N1 in layer L1:

Similar equations apply to the remaining the neurons of layer L1 and the neurons in layer L2 and L3.

Now, if I want to process an image with this fully connected neural network, the input layer must have a number of neurons equal to the number of pixels in the input image. So, we would need an input layer with 10000 neurons to process an image with only 100x100 pixels. This means the number of columns of the matrix W in the previous equation (4) would be 10000. This is really computational expensive. Additionally, each pixel is processed indipendetly of neighbor pixels.

So, we need to optimize the processing. If we look carefully at the previous equations (2) and (3), we will notice that they look very similar to the convolution equation (1). So, instead of computing different matrix multiplications (one for each layer), we can use fast convolution algorithms. This allows us to replace the fully connected neural network implementation with a CNN implementation.

Similar to the fully connected neural network, a CNN is a sequence of layers. The following figure highlights a typical CNN structure (other configurations have been proposed in the literature):

Each CNN layer is composed by two operations: a convolution followed by a pooling. The following figure highlights the first convolution layer of a CNN: 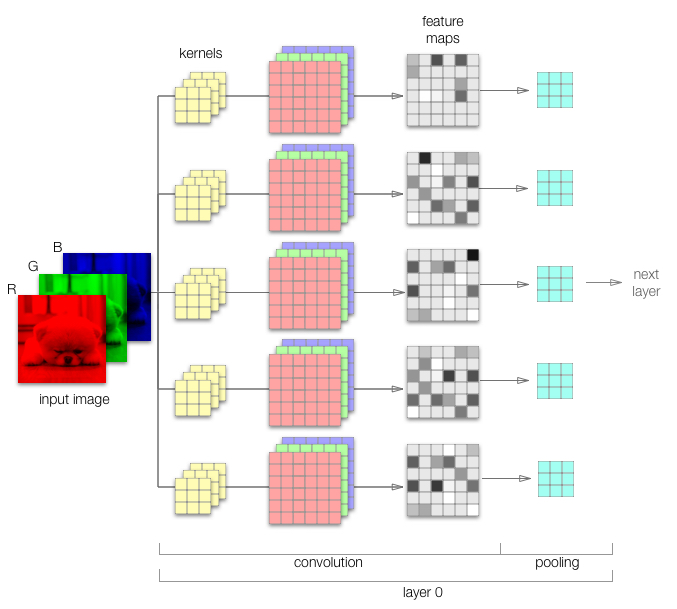 In iOS 10 and macOS 10.12, the Metal Performance Shaders Framework (and the Accelerate Framework) provides a new class to setup the particular convolution operation for a CNN.

The following snippet of code shows how to create the convolution operation for a CNN layer.

Let's give a look at the pooling operation.

An additional operation used in CNN layer is pooling. Basically, it is a downscale operation with the aim to reduce the image size while the image is processed from the input to the output of the CNN.

The pooling has a double functionality. First, it reduces the image resolution passing to the next CNN layer less detailed information. Second, it reduces the number of computations for next layer.

Using the MPSCNNPoolingMax class, we can translate the previous figure in source code:

Similarly, you can use the MPSCNNPoolingAverage to obtain the average pooling:

How do we handle the data in the Metal CNN? The Metal Performance Shaders Framework provides two new classes: MPSImage and MPSTemporaryImage.

This is the API you need to use an MPSImage:

You use the MPSImage for the input and output image of the CNN. For the intermediate results, you should instead use the MPSTemporaryImage class. The advantage of using the temporary image is that it will disappear as soon as the command buffer is submitted. This results in a reduction of the memory allocations and CPU costs.

You create a MPSTemporaryImage in a very similar way than the MPSImage:

To use a CNN, first you need to train it to a process known as training. The training generates a set of weight that then you use in the inference phase. The Metal Performance Shaders APIs allow you to implement only the CNN inference. The training phase is not available through these APIs. Apple suggests to use third-party tools.

A good alternative is to contact us and use our tools. We can help you with your specific classification problem. The advantage of working with us is that we take care also of any pre-processing stage that you would need for your data. We can also help you to define the neural network architecture, specifying the optimal number of layers and neurons (and other parameters).

We can also provide you with our own implementation of a CNN in Metal. In this way, you do not need to use third-party APIs and upload your data to a third-party service. Additionally, since we are expert in computer vision and pattern recognition, we can preprocess your images or audio data and prepare them for the neural network. Our convolutional neural network supports iOS 8, iOS 9 and, now iOS 10. We also optimized the algorithms for tvOS and macOS.

In this post, I gave you an overview of the new APIs introduced in the Metal Performance Shaders Framework for iOS 10 and macOS 10.12. In a previous post, I also provided you with an introduction on Machine Learning (ML) and Artificial Neural Networks (ANN) for iOS.

Geppy Parziale (@geppyp) is cofounder of InvasiveCode. He has developed many iOS applications and taught iOS development to many engineers around the world since 2008. He worked at Apple as iOS and OS X Engineer in the Core Recognition team. He has developed several iOS and OS X apps and frameworks for Apple, and many of his development projects are top-grossing iOS apps that are featured in the App Store. Geppy is an expert in computer vision and machine learning.